The Saga of Indian Em’ly: (A Collection of 4 Books) 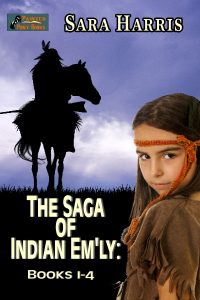 Twelve-year-old Wind That Knocks Down Lodges loves his little sister, Cactus Flower, and the wildness of the desert canyonland the Apache call home. But in one night of misunderstanding and mistakes, Knocks Down and Cactus Flower’s innocent world is shaken as they find themselves locked in the nearby fort with the pale face soldiers and their mother’s lifeless body. With no one to lean on but each other, Knocks Down and Cactus Flower must make their way as children of The People in the pale face world—pale faces who have now become the enemy.

After finding themselves at the mercy of the Army, far from Apache Territory and well on the trail to Colorado, Knocks Down must bring himself to trust the soldier, Pale Face Joe. But Joe disappears, and when ordered to dispose of the children or else, the other Army soldiers waste no time in depositing them at the nearest Catholic orphanage.

They manage to escape the evil orphanage along with a new pale face friend, Kid McCoy. But they are set upon by a gang of murdering claim jumpers who steal Cactus. With Kid McCoy’s help, Knocks Down goes after her. When they encounter a soldier who was responsible for their mother’s death, they realize he’s set on seeing them dead, as well. How can a boy defeat a battle-hardened soldier? Just when Knocks Down is about to give up, the biggest surprise of all changes everything…