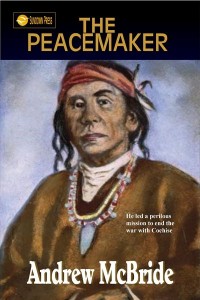 Eighteen-year-old scout Calvin 'Choctaw' Taylor believes he can handle whatever life throws his way. He’s been on his own for several years, and he only wants to make his mark in the world. When he is asked to guide peace emissary Sean Brennan and his adopted Apache daughter, Nahlin, into a Chiricahua Apache stronghold, he agrees—but then has second thoughts. He’s heard plenty about the many ways the Apache can kill a man.

But Mr. Brennan sways him, and they begin the long journey to find Cochise—and to try to forge a peace and an end to the Indian Wars that have raged for so long. During the journey, Choctaw begins to understand that there are some things about himself he doesn’t like—but he’s not sure what to do about it. Falling in love with Nahlin is something he never expected—and finds hard to live with.

The death and violence, love for Nahlin and respect for both Cochise and Mr. Brennan, have a gradual effect on Choctaw that change him. But is that change for the better? Can he live with the things he’s done to survive in the name of peace?