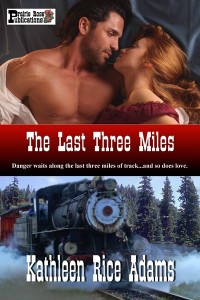 Danger waits along the last three miles of track…and so does love.

When an accident leaves Hamilton Hollister convinced he’ll never be more than half a man, he abandons construction of a railway spur his lumber mill needs to survive.

The magic of Christmas in a small Texas town may help them bridge the distance…if their hearts lay the rails for the last three miles.

Even awash in bright midmorning sunlight, Hollister, Texas, squatted against the piney woods like a collection of tombstones. From his third-floor bedroom, Hamilton Hollister surveyed the cemetery-in-the-making. In a few months, maybe a year, the settlement and his family’s good name would lie in a cold, gray grave.

And he didn’t give a damn. The town’s fate—his fate—had plunged over the sharp edge of a cliff the day half of him died.

“How much longer can you stare out that window?” Ham didn’t spare so much as a glance over his shoulder at the voice in the doorway. Oliver Madsen, come to deliver his daily sermon about bucking up. “You can’t hide in this house for the rest of your life.”

“We won’t know that until I’ve lived the rest of my life, now will we?” The whine of a steam-powered saw beyond the trees drew his attention, yet he felt nothing. No drive. No ambition. No pride in the lumber empire his forebears had built. Thirty thousand board-feet a day, six days a week, fifty-two weeks a year, with plans to double production. What a foolish dream.

“For God’s sake, Ham.” Oliver’s footsteps, muffled by the thick carpet his father had imported, stopped at Ham’s back. “Those people down there depend on you. They care about you.” He laid a grip across Ham’s shoulder, draping a small, tepid patch over skin that had borne a chill for three months. “And they’re worried about you.”

An awkward yank on his chair’s big wheels moved Ham away from the window and out of Oliver’s reach. “Set their minds at ease. They’ll get their Christmas bonuses, as always.”

Dr. Madsen stepped around the chair, facing Ham with his head cocked, censure pinching the skin beside his eyes. “That’s not the problem, and you know it. If the railroad spur isn’t finished, Hollister Lumber will be. Tell me you can turn your back on a hundred men and their families.”

“The track has done enough damage.”

“That was twenty years ago.” A cynical huff left Ham hollow. “Jeff never knew what hit him. He was the fortunate one.”

“I doubt he’d say that. At least you were lucky enough to live.”

“Lucky?” Ham slammed his palms on the chair’s arms hard enough to rattle the whole blasted contraption. “This is what you call lucky?”

Oliver dropped into a crouch. For the first time since the accident, someone looked up at Ham.

“I wish all my fancy medical education could tell us whether your back will heal, but it can’t.” Oliver smacked him on the knee hard enough to shove both useless legs sideways. “Finish what you started. Even if your legs are gone for good, the rest of you doesn’t have to go with them.”

“Don’t lecture me, you sanctimonious bastard.”

Ham sucked a breath though bared teeth as both fists clenched. He pointed a glare at the doctor, shaking with the effort not to lay out his lifelong friend in a broad shaft of sunlight ten feet away.

At the midpoint of a rise to his feet, Oliver leaned close. The reckless boy Ham had scuffled with in their youth crackled in his eyes. “Take a swing at me, Ham. Come on. Hit me. Do something, anything, besides wallow in self-pity.”

“Take my place. Then we’ll talk about—” Self-pity. The accusation thumped his chest, knocking most of the frustration from him on harsh breath. Exhaustion rushed in to fill the gap. He slumped into the woven cane at his back, eyes closed, flexing and extending the fingers on one hand while he gathered what strength he could find. “That spur stops right where it is. The mill runs itself. Has for two generations. We don’t need the track.”

“You stubborn son of a… Eight new logging camps. Eight. Right in your back yard. And those are the ones you’re aware of.” Oliver straightened, raking a hand through his hair on a sigh. “Without that track, you’ll be out of business by the end of the year. Ten miles, that’s all, and you’ve got seven weeks to lay them. If you can’t work up the gumption, hire somebody who can.”

Ham couldn’t work up the gumption to put a growl into his voice, so he flung go to hell at the doctor in a glare. “You want that damn railroad finished, you hire someone.”

“All right, I will.” Oliver marched to the door, stopping with his hand on the knob. “Remember you said that.”