The Keepers of Camelot 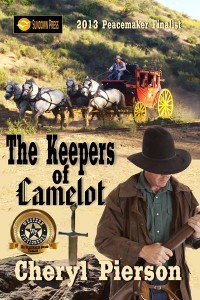 Under attack by Apache Indians, Arthur and the other stagecoach occupants are forced to take shelter at the stage station where he discovers Ginny, living as the wife of the station proprietor. Could she be his Guinevere?

As the Apaches attack once more, Arthur recognizes their leader as none other than Lancelot du Lac. Arthur knows that Guinevere has recognized him, as well. They’ve each lived a thousand lives since the last fateful day they spent together, when Lance rescued Ginny and fought with Arthur. But has their dream of Camelot faded completely?

One of the occupants of the stagecoach, a young boy, touches the forgotten vision within Arthur, centuries after Camelot’s loss. The prophecy says Arthur will return when the world needs him most—but why are Lance and Ginny here? Can the steadfast belief of one homeless boy rekindle the glorious hope of the greatest legend of all time?