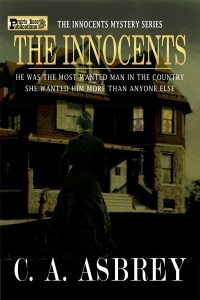 Pinkerton Detective Abigail MacKay is a master of disguises—and of new crime-solving technology! But she’ll have to move fast to stay a step ahead of Nat Quinn and Jake Conroy.

Nat and Jake are the ringleaders of The Innocents, a western gang that specializes in holding up trains carrying payrolls—and Nat is pretty savvy when it comes to using the new sciences of 1868 in committing his crimes.

Charismatic Nat and handsome Jake are on the run, and they’ve always gotten away before—before Abi. But when Abi is caught by another band of outlaws during the chase, there’s no other choice for Nat and Jake but to save her life. Abi owes them, and she agrees to help them bring in the murderer of a family friend.

The web of criminal activity grows more entangled with each passing day, but Nat, Jake, and Abi are united in their efforts to find the murderer. Once that happens, all bets are off, and Abi will be turning Nat and Jake over to the law. But can she do it? She finds herself falling for Nat, but is that growing attraction real? Or is he just using her to learn more about the Pinkertons’ methods? Abi always gets her man—but she may have met her match in her “best enemies”—THE INNOCENTS.