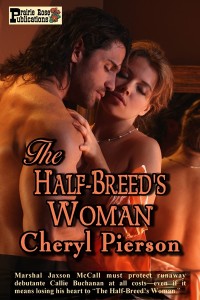 U.S. Deputy Marshal Jaxson McCall tracks runaway debutante Callie Buchanan from Washington, D.C., into the unforgiving badlands of Indian Territory.  But once the sparks fly between them, can he bring himself to take the beautiful young woman in to face an attempted murder charge?

Callie's greedy stepfather, a powerful government official, has his own plans for her—a  fate much worse than jail. Jaxson must protect her at all costs—even if it means his own death—or losing his heart to “The Half-Breed’s Woman”.