The Gunslinger’s Redemption: A Six Guns and Prairie Roses Novel 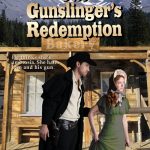 Widow Martha McKenzie and her young son, Eddy, live in the shadow of California’s beautiful Mount Shasta. Martha helps in her father’s bakery, and still grieves the loss of her husband ten years earlier, cut down by a murderer’s bullet.

Wealthy mine owner Horace Slade promises to fulfill all Martha’s dreams of a life of luxury in San Francisco—if she’ll only marry him. But something holds her back, despite Horace’s repeated attempts to get a ring on her finger.

Jake Gideon is a bounty hunter, a gunslinger hired by Wells Fargo to catch stagecoach robber Black Bart. When the trail leads him to Yreka, Jake is taken with Martha—but she wants nothing to do with a hired gunman—especially the one she suspects might have been responsible for her husband’s death ten years earlier!

Even if Jake decided to settle down and give her his heart, how could Martha ever be sure he’s telling her the truth? When a dark specter appears, it may be too late to give Jake a chance to prove himself. In a winner-take-all game, will Martha’s life be forfeit?