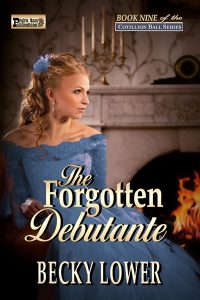 At fifteen, Saffron Fitzpatrick despairs of ever getting to attend a Cotillion Ball and dance the night away, but excitement still manages to find her! A chance meeting with a Union soldier in the barn leads to Saffron helping him escape—but not before they share a spontaneous, tender first kiss.

Ezekiel Boone has lost everything. His four older brothers were killed at Chancellorsville, and he must get home and break the awful news to his family. Though farming is not in his blood, he owes it to his father to help with the place his family has claimed as their own. But how can he ever forget Saffron Fitzpatrick?

When Saffron and Zeke find themselves working together in Washington, D.C., three years later, their powerful former attraction ignites, full force. Saffron’s older brother, Halwyn, is coordinating the massive reburial project of Union soldiers, and she has been hired to work in his office. Zeke has invaluable information–information that no one could know if they hadn’t actually been on the battlefield.

Though the war is over, a happy future together may still elude Zeke and Saffron…especially if Saffron’s older, protective brother and the U.S. Army have anything to say about it! Will Zeke hang for desertion? Will Saffron be able to prove his innocence?

Don’t miss the exciting conclusion to the Cotillion Ball Saga!