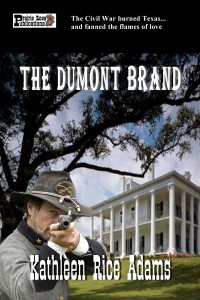 Two stories in one volume.

On the eve of the Civil War, family secrets threaten everything a ranching dynasty has built…until Amon Collier finds salvation in the wrong woman’s love. In the aftermath of battle, a woman destroyed by betrayal brings peace to his brother Ben's wounded soul.

After four long years in hell, Confederate cavalry officer Bennett Collier just wants to go home—assuming home still exists. Widowed Jayhawker Maggie Fannin will hold onto her home at any cost…even if she must face down the imposing Rebel soldier who accuses her of squatting.

Excerpt from The Big Uneasy

Josephine LaPierre nearly tumbled from the seat when the buggy’s wheel struck yet another hole in the muddy road. She gripped the padded armrest with one hand and steadied the tiny dog in her lap with the other. Vibration beneath her gloved fingers warned of an impending explosion of temper.

“Hush, Napoleon.” She scratched behind his bat-like ears until he quieted. “All is well, mon petit.”

Napoleon sneezed. After turning three circles in her lap, he nestled into Jo’s skirt. She bestowed a fond smile upon her fearsome bodyguard, running a hand across the top of his head and down his smooth back. Her tiny knight in soft, fawn-colored armor.

The man beside her took the horse in hand with a flick of his wrist, passing an amused glance over Jo and the dog. “Feisty little critter, ain’t he?”

The suppressed laughter in startling blue eyes sent a flicker of heat dancing across Jo’s cheekbones. She looked away. “He can be. I warn you, his bark is not worse than his bite.”

“I’ll keep that in mind.” Chuckling, the driver scratched the top of the little dog’s head.

Jo tensed, prepared to intervene, but Napoleon stretched toward his admirer and licked the man’s glove.

The driver withdrew his hand to run a finger between his stand-up collar and his neck. Then he swatted at his dark broadcloth trousers and frockcoat as if they inconvenienced him, as well. “I imagine this trip’s been a mite rough on you and that little fella.”

Not in the least disposed to admit her posterior might never be the same, Jo pulled on the most gracious smile she could find. “Monsieur—”

“Amon.” Though gentle, the correction was much firmer than she was accustomed to hearing from servants. “No monsieur about it. Just Amon.” The French word rolled from his lips with practiced ease. How odd.

“Amon. How much farther must we travel?”

“Won’t be long now. House is just up the road a piece.”

Her gaze followed his nod. How could anyone judge distance in such a place? Texas was nothing at all like New Orleans. Although the land here lay as flat as at home, Texas remained wild and unpopulated. Even on the docks where she disembarked hours ago, no laughing patois chatter brightened her ears, nor did young women of color in vivid tignons compete for attention with azaleas and bougainvillea. No aroma of magnolia and honeysuckle, of strong coffee and fresh beignets, greeted her arrival.

The afternoon sun, brighter here somehow, chased the last of the morning’s rain from the landscape. The scent of wet earth rose with the steam, intertwining with damp wood and a vague fishiness from the nearby bayou. Strange cattle with wicked, curling horns as long as their bodies dotted miles and miles of green, overgrown in patches with thorny brush and vines. Here and there, brief flashes of yellow peeked from tall, waving grass.

What did Texans eat and drink and admire in this odd, monochromatic country? What did they do for entertainment? With no other humans around to practice the art of conversation, did they forget how to speak?

Jo flicked open the blades of sandalwood dangling from her wrist and fanned herself and Napoleon in an unsuccessful attempt to dissipate the suffocating heat. “Have you worked for Monsieur Collier long?”

Rubbing knuckles along the line of a strong jaw, Amon stared over the bay horse’s ears. “All my life.”

His voice, quiet yet strong, soothed some of her unease. The man spoke at least a little French. Perhaps a modicum of civilization existed in the wilderness. “Tell me about him, s’il vous plaît.”

“Not much to tell.” The gaze he swung from one horizon to the other caressed each tree, each blade of grass in its path. “Edson Collier owns everything we’ve driven through. All you can see, smell, taste, or touch. Every living thing on this property wears a Collier brand.”