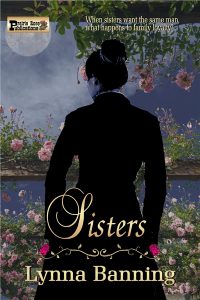 When Ellie Grenfell’s fiancé, Deputy Sheriff Jack Mallory, is wounded in the line of duty, she does what she’s done her entire life—she sends for her older sister!

Widowed Verity Varner returns to Smoke River, Oregon, to help Ellie and serve as her chaperone until the wedding takes place. But shortly after Verity’s arrival, she realizes Jack’s wound has become infected, and he loses part of his arm.

Over the months of Jack’s recuperation and learning how to cope with his disability, Ellie reveals her selfishness and disinterest in Jack’s daily struggle. Verity understands the obstacles Jack faces, offering sympathy and encouragement—and she also understands something else: Ellie is not the person Verity thought she was.

All her life, Verity has been a surrogate mother to Ellie, putting her sister’s needs before her own. But, now, the unthinkable has happened—Verity and Jack have fallen in love, even as his wedding to Ellie draws ever closer. How can Verity choose between her love for Jack and her loyalty to Ellie? Will she risk her chance for true love to preserve the bond between SISTERS?