Sir Conrad and the Christmas Treasure 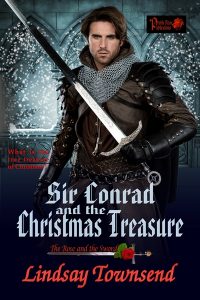 Maggie’s younger brother, Michael, is kidnapped by outlaws, and it’s up to her to rescue him. Appealing to Sir Conrad, the grim steward of the northern English high lands, is the very last thing she wants to do. With the very real possibility that the outlaws know of Michael’s talent—the ability to open any lock, to reveal any treasure—Maggie races against time to find him before his usefulness to the outlaws is ended.

Sir Conrad desires Maggie from the minute he sees her—she makes him feel alive again—and that has not happened since the death of his wife. Though he hasn’t known Maggie before, a strange feeling of familiarity nags, and he agrees to aid the beautiful peasant girl in this quest of finding her brother.

Joining forces, Maggie and Sir Conrad form a tenuous bond. When an assassin attacks Maggie, the pieces of the puzzle begin to fit, and Conrad realizes that even Maggie doesn’t know the power she holds. But Conrad not only must keep Maggie safe, he must thwart the dangerous devices of his spiteful older brother, Richard, who has lately returned from crusade.

As love blossoms, Maggie and Conrad must protect one another. Evil is all around them, and doubt is a cruel enemy. Will their faith in each other keep them united? In the world of dangerous courtly intrigue, who is saving whom? Love is all that matters…but can that be enough?