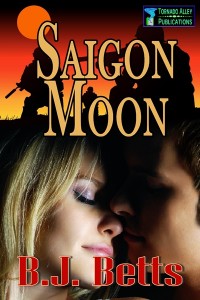 Rick Jameson leaves his small Iowa town for the jungles of Vietnam expecting to come home and marry his high school sweetheart, Vickie Richards. But when he receives a “Dear John” letter with her engagement ring enclosed, Rick decides to be the biggest badass Marine the Viet Cong have ever dealt with. After all…what does he have to live for now?

On one suicide mission too many, Rick is shot and left for dead, only to be discovered by a young Vietnamese girl, Hang Le. She saves Rick’s life, and their passion flares in the steamy jungles of southeast Asia.

Years later, when Rick returns to Viet Nam with his military buddies, a chance encounter with Hang Le’s brother leads Rick to her door. He’s a millionaire now; but as a successful clothing designer, Hang Le has her own life she might not want to give up for the American who left her behind. Now that the war is over, will Rick and Hang Le be able to rekindle the love they had to turn their backs on so long ago?