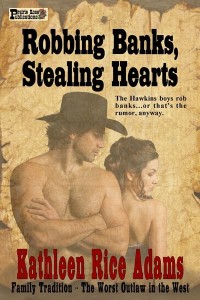 Everyone should have career at which they excel. At failing to commit crimes, nobody is better than Laredo and Tombstone Hawkins. Maybe they can bumble their way into love.

The Worst Outlaw in the West
Laredo Hawkins has one ambition: to redeem his family’s honor by pulling the first successful bank robbery in the Hawkins clan’s long, disappointing history. Spinster Prudence Barrett is desperate to save her family’s bank from her brother’s reckless investments. A chance encounter between the dime-novel bandit and the old maid may set the pair on a path to infamy…if either can find a map.

Family Tradition
Haunted by his kin’s tradition of spectacular failure, bank robber Tombstone Hawkins is honor-bound to prove his family tree produced at least one bad apple. When carnival fortuneteller Pansy Gilchrist tries to help, she accidentally summons a pair of dishonest-to-goodness ghosts. Getting into the spirit of a crime is one thing…but how do you get the spirits out?

Swiping the air to dissipate the dust, Tombstone Hawkins focused a glare on the backs of three riders hightailing it south. Now if that didn’t beat all. Robbed at gunpoint for six dollars and eight-five cents.

Helluva thing when a man couldn’t trust his own gang.

“Enjoy the wealth, you sorry sons of—” Yelling wouldn’t do any good, but it made him feel better.

Stone hiked his saddle onto a shoulder. Even Jack had galloped off with the ungrateful cusses. Damn fickle cayuse. Good riddance.

Now what? He couldn’t very well rob a bank all by his lonesome. His brother had tried, and look what happened to him: Married up with some banker lady and wearing a tin star.

Disgusted disbelief shook loose a grunt. “Never thought I’d see a Hawkins sink that low.” True, his relatives didn’t have the most impressive reputation along the Outlaw Trail—in fact, they’d been asked to take another road more than once—but a lawman in the family was downright humiliating.

If Pop hadn’t gone over the jump a few years back, the news would’ve sent him heading for the Pearly Gates on a fast horse.

The wind kicked up, shoving mean-looking clouds across the sky. The wheezing bray of a calliope wove through the gusts. Shameful waste of a traveling show. The off-key racket would have made the perfect cover for dynamiting a safe. Even if the robbery had conformed to the Hawkins tradition of spectacular failure, he might at least have outlawed his way into a jail cell.

What good was a name like Tombstone if the moniker never showed up on a wanted poster?