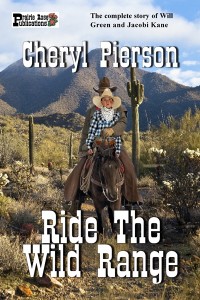 Young Will Green’s entire family is murdered by Red Eagle’s Apache renegades. During the long days and nights of captivity, Will plans his vengeance as only a ten-year-old boy can. But those plans are thwarted, along with his own imminent death, by a lone stranger who boldly walks into the Apache camp and forcefully takes Will from the band of warriors. Angry and humiliated, the Indians swear to follow Will and his savior as soon as they can round up their horses—and they won’t stop until blood runs red.

Jacobi Kane is a man of few words and a questionable past, but it doesn’t take long for trust to build between him and Will. As Will struggles to recover from his own horrific ordeal and losses, Jacobi is forced to face some demons of his own.

Peace is elusive, as Red Eagle’s band strikes again, and a cadre of lawmen come calling for Kane to track the bloodthirsty renegade down and put an end to the Apaches reign of terror across Texas and Indian Territory. But by this time, Kane has other responsibilities—Will, a new wife, and a baby on the way. Can he leave them behind to do what no other man has been able to, or will his own past keep him from his duty?

Yet another menace looms, as frightening to Will as the Apaches ever were. His wealthy Yankee grandfather is determined to wrest Will away from his newfound family and beloved western land, bringing him back to Boston and a life he can never embrace.