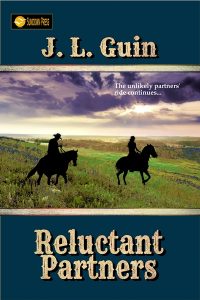 Bounty hunter Judd Jacoby has been doing things his own way for many years—up until now. He’s got a reputation for always bringing in the outlaw he’s after—and doing it alone. But when Judd is dealt a serious head injury, he’s reluctantly forced to accept a partnership with Faye McJunkin, a young woman he rescued when pursuing criminal Lonnie Sims.

When Judd and Faye track two ruthless bank robbers to a cabin, they must confront the men after dark. Faye comes up with a plan to get them in close proximity of the cabin door, but what might happen next is anyone’s guess—and the stakes are all or nothing.

As time goes by, Faye proves herself time and again, but can Judd accept needing an unwanted partner? If he doesn’t, will he have to give up bounty hunting entirely? There might be an unexpected, surprising solution to the unusual dilemma for both of these RELUCTANT PARTNERS…if they live long enough!