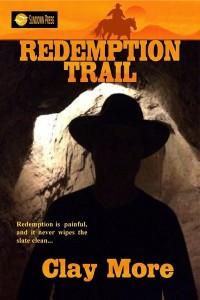 When Sam Gibson accidentally kills a young boy, he knows he can never forgive himself. He sets out on a journey to try and do some good in the world to make up for the action he can never forget.

But when he rides into the small town of Cooksville, he’s set up to take the fall for his part in a bank robbery—a robbery he was trying to stop. Tried and convicted of murder, he’s sentenced to hang at sunrise. But a newspaperman who knows the truth manages to help him escape and flee the crooked law of the town, sending him to an old miner, Cole Flanagan in the Pinto Mountains.

When Sam arrives, he finds Cole dead, his body still warm—and Sam is captured by the outlaws who are part of the widening plot he’s unwittingly become a part of. Will Sam be able to escape his fate a second time and warn the other innocents who stand to be murdered by this lawless gang? Will he be able to convince them the new marshal is part of the plot? Their lives depend on him, as he rides the Redemption Trail.