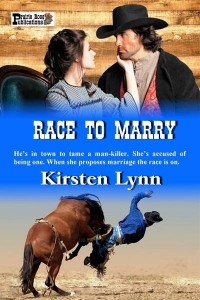 Desperate to save her family ranch, Josie Allison signs up for a bride race then begs a cowboy to put his John Hancock down to catch her. Marrying a man you don’t know is crazy, but there’s something about this cowboy that makes Josie want to trust him with her land and maybe even her heart. And Josie knows marrying a man you do know can be twice as loco.

Cal Renner came to Sheridan, Wyoming, for one thing: ride the horse known as a man-killer and use the purse money to buy his own ranch. When a woman proposes to him five minutes after his feet touch Sheridan dirt, he’s sure a Wyoming asylum is missing a patient. But when she turns those summer green eyes his way, the promise of a family to go with that ranch is too hard to resist.

When secrets are revealed and enemies join the race, Cal and Josie will have to learn to trust each other, because the race to the altar has turned into the race for their hearts.