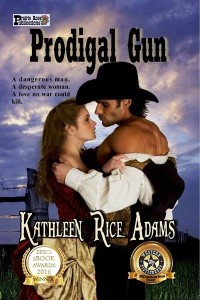 Rancher Jessie Caine buried her heart with the childhood sweetheart Yankees killed on a distant battlefield. Sixteen years later, as a Texas range war looms and hired guns arrive to pursue a wealthy carpetbagger’s agenda, Jessie discovers the only man she ever loved isn’t dead.

At least not yet.

Embittered by a brother’s betrayal, notorious gunman Calhoun is a dangerous man, come home to do an unsavory job. A bushwhacker’s bullet nearly takes his life on Jessie’s land, trapping him in a standoff between the past he tried to bury and the infamy he never will. One taste of the only woman he ever loved puts more than his life and her ranch in the crossfire.

With a price on his head, a debt to a wealthy employer around his neck, and a defiant woman tugging at his heart, Calhoun’s guns may not be enough to keep him from the grave. Caught between his enemies and hers, Jessie faces an agonizing choice: Which of her dreams will die?

A red-tailed hawk circled in the cloudless sky, dipping one wing in a silent salute before plunging to the earth like a bullet. Twenty feet from the gelding’s hooves, a jackrabbit barely had time to shriek.

The horse tossed his head and danced a few steps. Calhoun pressed his knees against the saddle and drew the slack from the reins.

“Easy, fella.” He patted the chestnut’s neck. “You’re too big for him to carry off.”

Tugging the brim of his Stetson closer to his eyes to block the afternoon glare, Calhoun settled into a lazy slouch. Texas hadn’t changed—still big and open and empty. A man could ride for days with no company but his own.

He scanned the surrounding terrain. Rocks and scrub littered the sand on both sides of the dry wash. Occasional stands of oak and mesquite interrupted the grama grass and prickly pear toward the skyline, but nothing moved. No insects or reptiles. No birds. Not even a breeze. Only the gelding’s hooves thudding against parched dirt and the creak of saddle leather violated the silence.

Too still. Too quiet. Too…empty. Unease had dogged him for the past six months, ever since the trouble in Kansas. Now, deep in the Texas Hill Country, an army of ants crawled the fringes of his nerves.

Someone hunted the hunter. Who? His gaze darted from sand to scrub to rock. “Show yourself, you son of a bitch.”

The horse’s ears swiveled to catch the mutter. Good God, you’re talkin’ to yourself.

Rubbing eyes dried by heat and fatigue, he sucked a lungful of scalding air. Two weeks of hard travel could prey on a man’s mind. Both he and the horse could use a brief rest. If memory served, a watering hole and some blessed shade lay just over the next rise.

A familiar rancor swelled in his chest. Some memories persisted despite a man’s best effort to forget.

Boggs better have a damn good reason for yanking him away from the high-dollar comfort of Miss Lavinia’s in Silver City. A wry twist pinched one corner of Calhoun’s lips. Now there was a memory to savor. The heat in New Mexico Territory could burn a man clear to his bones without leaving a mark.

The horse brushed through a patch of wild lavender, and a soft, sweet fragrance puffed at an old spark. Dammit. He’d doused those flames more than a dozen years ago, stayed the hell out of the godforsaken state to avoid the ashes. And now, with a vague summons he couldn’t ignore, Boggs had dragged him much too close—

Sunlight winked in his peripheral vision. The hairs on the back of his neck jumped to attention mere seconds before the sharp crack of rifle fire fractured the air.

Reflex pushed Calhoun against the chestnut’s neck at the same time his boot heels jabbed the animal’s ribs. The horse leapt forward. With a few strides, he flattened into a dead-man’s run over uneven ground.

A second shot. The gelding screamed and dropped, pitching Calhoun over its head. Hard contact with the ground knocked the breath from his lungs. Pinpoints of light flickered before his eyes.

Ripping both Colts from leather, he rolled to a crouch and scrambled for cover. A third report bounced off the surrounding rock, and a hot bite knocked one leg from under him. Shit. He slammed facedown into the baked earth and lay still, his left arm trapped beneath him. The gun in his other hand skidded out of reach.

Fine. Cowardly bastard wanted a piece of him, let him come get it. Calhoun willed twitchy muscles to go limp.

Eyes closed, he counted the seconds while he corralled his galloping pulse and reined in the ragged gasps racing through his lungs. Short, shallow breaths wouldn’t stir the dust. The sun scorched his back, his hair, while the coarse sand beneath his left thigh grew sticky. Sweat slid in itchy beads down his face and neck.

Only the horse’s pitiful moans and occasional thrashing disturbed the stifling silence until a jingle of spurs approached. Cautious steps scraping rocky ground said the sharpshooter was heavy, either well-fed or just plain big, and more comfortable mounted than on foot. The scuff of one too-heavy hoof punctuated the gait of a horse tagging along.

One man, one horse. No problem.

A shadow fell across Calhoun’s face an instant before the pointed toe of a boot jabbed him in the ribs and flipped him onto his back. His eyes snapped open, and the Peacemaker that had been gnawing at his gut fired an un-aimed shot.

By the time Calhoun dragged himself upright, the man’s chest no longer rose and fell. Blood sprawled across the front of his shirt around a hole to the left of the third button. Wide, dull eyes fixed on the heavens in an eternal stare. One hand clutched a battered Winchester in a literal death grip.

“Jubal Delaney. Wondered when I’d see your ugly mug again.” Calhoun kicked the rifle from the dead man’s grasp. Stupid ran bone-deep in some families. “Give my regards to your no-account brothers.”

The last he’d heard, the only formerly surviving Delaney was doing time in Colorado Territorial. None of the Delaney boys had been known for his smarts. How the hell had this one tracked him to the middle of nowhere? Those damn pesky ants gathered between his shoulder blades and bit.

Delaney’s sorrel horse swished its tail and blinked at Calhoun from the other side of the body.

“What the hell’re you starin’ at?” he growled.

The horse snorted but didn’t move or look away.

Calhoun holstered the Colt on his left, retrieved the gun he’d dropped and examined the sand-covered barrel. Probably sand inside, too, dammit. The gun slid into the sheath on his right. He’d clean it later. Pent-up energy made for shaky hands, and one hole in his hide was enough.

His injured leg didn’t hurt—yet—but chunks of lead had a way of interfering with muscle. A quick swipe against his shoulder wiped the grit from the side of his face as he limped to the stricken chestnut. Eyes alive with panic and pain begged for help, but the critter no longer thrashed. The way one foreleg dangled, the horse was down for good.

In the short time they’d traveled together—only since El Paso—the beast had proved smart and fast. He didn’t deserve this kind of death.

After replacing the spent rounds in the Peacemaker, Calhoun picked up his hat, whacked it against his uninjured thigh, and settled the Stetson on his head. He snagged the carbine, saddlebags, and canteens from the carcass. Bedroll, saddle, everything else he could replace, and Delaney’s horse would do, for now.

Calhoun turned to the unflappable sorrel, and the world spun with him. Off-balance, he staggered backward a step. Damn imbecile. You’re bleedin’. What’d you expect?

The last of his pent-up energy drained into the sand. His knees gave way, and he sank onto a boulder. He let the saddlebags slide from his shoulder as he yanked the black kerchief from his neck. Gritting his teeth, he jerked the sweaty fabric into a tight knot over the bloodstained hole in his denims.

When he straightened, a knife-sharp pain lanced through his side. Breath hissed between his teeth as his hand automatically sought the source…and came away sticky.

A red smear marked his palm. He stared, then forced his gaze to a dark stain blossoming low across the blue chambray of his shirt. Son of a bitch. When the hell did that happen?

Near-panic sent buttons flying as he ripped the shirt from the waistband of his britches. Crimson oozed from a small hole above his hipbone. An inch to the left and the bastard would have missed him.

He swiped the other palm behind his back. Clean. The damn slug stopped halfway through.

His breath caught on the serrated edge of a stabbing pain when he peeled the sweat-drenched chambray from his skin. The bloody shirt, twisted into a rope, would suffice for a bandage. He knotted the sleeves over the bullet hole to slow the bleeding, then withdrew another shirt and a silver flask from the saddlebags.

With the uncorked flask, he offered Delaney a sardonic salute. “Can’t blame a man for tryin’, can you, hombre?” A long swig of whiskey slid down his throat, the draught’s smooth fire burning away the pain and the dust. “Better men than you have failed.”

And every one of them had tried Calhoun’s patience. Living was a habit he intended to continue. If the Yankees couldn’t plant his ass in four hellacious years, a road agent looking for revenge sure as hell hadn’t earned the right.

But the bushwhacker might get lucky if Calhoun sat here much longer. Already heaviness weighted his limbs, and a dry cold crept upward from his boots.

One more gulp from the flask, and he shrugged into the clean shirt, blue chambray like the first. He let the hem hang and forced unwilling legs to hold his weight. Damn Boggs to hell. He ought to charge the colonel double for the sheer aggravation.

Thirty feet to the sorrel. Calhoun let mounting resentment wind through him and bolster waning resolve. There might be a doc in Uvalde…a hard day’s ride to the south. Boggs’s spread lay farther than that to the north. Before he reached either place, he’d be dead.

A heavy breath snaked out through his teeth. Yeah…he could make the ranch. The main house perched along Cimarron Creek, only a couple of hours away.

The mere thought of swallowing his pride and a dozen years of bitterness shortened Calhoun’s fuse to the point of combustion. Even now, the bile rising in his gullet forced a sour taste into his mouth. Between that and the blood and the reception he expected, something was bound to explode.

The twin irons hugging his thighs were sure to raise a ruckus at the Eights, but truth be told, he didn’t care what the conniving Caine clan thought. More a part of him than his own skin, the .45s could do his talking, if necessary.

Calhoun’s jaw tightened. At least when his guns spoke, they didn’t lie.