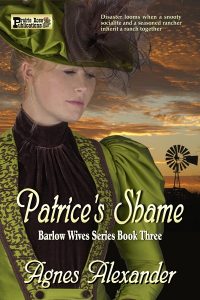 Beautiful Patrice Dickerson is all too happy to leave Philadelphia to claim half of a ranch in Wyoming—an unexpected windfall from an aunt she never knew. But the catch is, the other half has been left to a man that Patrice has never met. Patrice can think of nothing but the new start this gift means for her—to outrun the shame that has threatened her all her life. Her mother, a well-known prostitute, has lately been pressing Patrice to join her in “the business” with threats of letting everyone know Patrice is her daughter—and Patrice lives in fear that her society friends will discover who she really is.

Gavin Barlow has suddenly found himself the owner of half of the Hopewell Ranch—a spread that adjoins the Barlow family land. When the new joint owner from back East arrives, Gavin plans to ask him to sell out. A ranch the size of the Hopewell spread would expand the Barlow holdings significantly. Surely, an Eastern dandy will be eager to sell…

But when Patrice arrives in Wyoming, Gavin is unprepared for her haughty demeanor. He never expected his “partner” to be a woman—and a rude one, at that! His hopes to buy her out are dashed in the face of her self-importance—a façade to hide her secrets.

An accident steals Patrice’s memory. Who is she, and why is she in Wyoming? Her sweet personality is totally opposite the Patrice that Gavin has come to know and be wary of—but which “Patrice” is the real one? As their relationship blossoms into true love, each of them hopes for a life together on the ranch they’ve inherited, but is it possible?

Patrice’s mother follows her to Wyoming with an evil plan of her own, threatening to expose Patrice’s background to Gavin. Can they still find true love in spite of PATRICE’S SHAME?