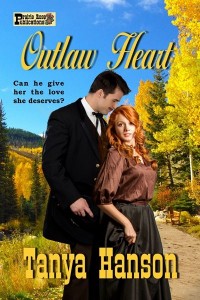 When ex-outlaw Bronx Sanderson arrives in Leadville, Colorado, he has plans to make a new start and put his past behind him. But right away, he meets flame-haired Lila Brewster, a beautiful widow who reminds him of someone from the past he’s trying to forget.

Lila does so much for everyone else at the mission she and her late husband, Emmett, started, she has no time to think of her own wishes. It comes as quite a surprise when she finds herself attracted to Bronx Sanderson—especially since she’s vowed in her heart to keep the mission—and her preacher husband’s memory—alive.

With advice from Doc Holliday and a meddlesome landlady, can Bronx and Lila make their own future? When a Pinkerton detective shows up, Bronx is between a rock and a hard place—but he’s determined to quit running. Lila’s domineering brother-in-law also arrives in Leadville to try to force her to marry him. If Bronx is arrested, what choice will Lila have?