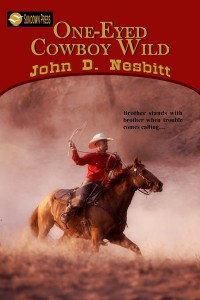 When Zeke Hill returns home, his brother Gene is glad to see him—despite some troubling changes. As Zeke’s true character comes out, Gene realizes that his brother doesn’t have a strong set of moral values.

When Zeke resumes a deadly feud with Charlie Bickford, and then Charlie’s brother, Chet, Gene has no choice but to stick by his own brother. But at what cost?

Danger stalks the Hill brothers, and Gene’s budding relationship with a pretty young ranch girl, Katharine Rose, is at stake. Blood’s thicker than water…but trouble is here to stay.

A traditional western that depends more on character than plot . . . This is definitely a thinking man’s or woman’s novel. —Roundup Magazine

One-Eyed Cowboy Wild is a refreshing version of the stories that first set the Western before its audience. [It] is a Western in the form of classics like The Virginian. . . . Prepare yourself to experience the Western the way it was before gratuitous violence was the American way of entertainment. —Springdale, Ark., News

. . .a remarkable work . . . Nesbitt is a true artist. . . . One-Eyed Cowboy Wild has as its most stylish feature dialogue which is simply superb.  —Western American Literature

Nesbitt offers in his first novel a fine tale of the West. . . . More books from this talented pen would be most welcome.  —Library Journal