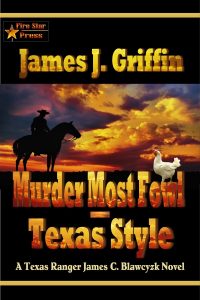 Texas Ranger Jim Blawcyzk is looking forward to an easy Monday, until he gets a call from the Llano County Sheriff. A woman has been murdered, the only clue a dead chicken hanging beside her. Before Jim can complete his investigation, another body—and another dead chicken—have been discovered in an abandoned truck.

As the murders begin to stack up, so do the suspects, including a mysterious British couple who keep appearing at the scene of each unique killing. Is it mere coincidence, or something else? When cryptic notes begin arriving at the Llano newspaper office, they hint at more deaths to come.

As Jim’s desperate search for the killer takes him from the back roads of Llano County to the dangerous club scene in downtown Austin, he races against time to stop the killings. But can he find the murderer before he or she strikes again? Or will the killer turn the tables and come after Jim for one last MURDER MOST FOWL—TEXAS STYLE…