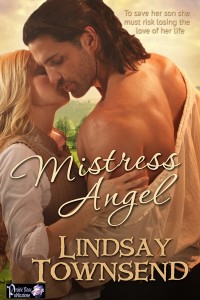 Once a child-bride, married with the intent to stop a blood-feud between rich and ambitious families in fourteenth century London, Isabella is now a young widow, a medieval Cinderella, tormented and blamed.

Seeking always to escape her grim destiny, she can do nothing but endure. But when her beloved son, Matthew, is torn away from her care, spirited somewhere into the country by her malicious in-laws, Isabella's stoic endurance turns to desperation. To save her son she will do anything, risk anything—even if it means she must lose the love of her life, the handsome, brave armorer Stephen Fletcher.

But Stephen is determined to help her. Though he’d thought to never love again, he has no choice when his Mistress Angel enters his life—and changes their destinies forever.