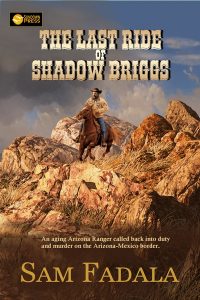 Justice must be served when eighteen-year-old Billy Point is murdered on the Arizona-Mexico border. But the prominent family of the young man is incensed that the lawman chosen to go after the killers is a retired Arizona Ranger—John Shadow Briggs.

Shadow Briggs has never been one to shirk his duty—and this time is no different. The best of the best, he follows the cold trail of the murderers, muddied by the attempts of the young man’s hot-headed father to take the law into his own hands.

The re-telling of this last assignment, the steady pursuit, and the final outcome is the precious gift Shadow Briggs bequeaths an aspiring young writer. This is the story of how tangled justice was sorted by one man. Duty lies heavy on a man’s shoulders, and some things can never be forgotten. Such was THE LAST RIDE OF SHADOW BRIGGS…