It Takes a Man 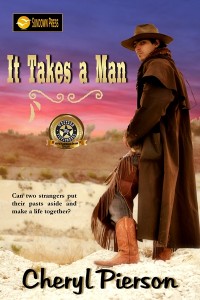 Ex-Confederate soldier Derrick McCain needs some answers from his father, Cherokee statesman Collin Ridge—and he’s waited long enough. But Ridge is on his death bed when he summons Derrick and Fiona McCain, Derrick’s mother, to return to Indian Territory. Will they make it in time? It’s the only chance Derrick will have to learn what he needs to know from the man who can tell him everything—if he only will. As Fiona and Collin patch up their long-ago unrequited love, Derrick meets a young woman who is out of choices. Pregnant, disowned, and bearing the weight of guilt over the death of her sister, Leah Martin has nowhere to turn. But the dark-eyed beauty sparks something inside Derrick that he thought long dead, and when her father shows up with an abusive suitor, Derrick vows to keep her out of harm’s way. Can he protect Leah from what her father has planned for her? Offering marriage would change his life forever—and he’s not in the market for a wife. To make matters worse, the child she carries is that of Derrick’s nemesis, Clark Davis. IT TAKES A MAN to do the right thing…can Derrick McCain deliver?