Into the Land of Shadows 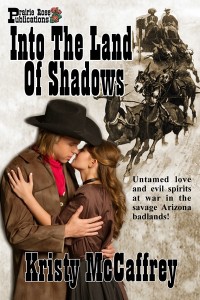 Kate Kinsella has no choice but to go after Charley Barstow and talk some sense into him. After all, he's skipped town, leaving a string of broken hearts and a pregnant fiancée   But Kate didn't count on being kidnapped by a band of criminals along the way! Ethan Barstow is hot on his younger brother's trail, too. He rescues Kate, believing her to be Charley's fiancée  and suggests they try to find him together. Kate's reluctance has him baffled.

Once they find Charley, can Ethan and Kate realize their own love and happiness with one another through the dark deception and hurt? Or will they both return INTO THE LAND OF SHADOWS?

Ethan Barstow reined in his horse and the mare shook her head. From the cover of a band of pine trees, he had an open view of a clearing just below their hillside lunch break. A light breeze caressed the yellow tufts of grass and a startled coyote ran for cover in the distance.

Whiskey snorted and flattened her golden-brown ears. Ethan adjusted the brim of his hat and waited.

The distant sound of hoof beats became audible and a head bobbed into view over the crest of the open countryside. A torso soon appeared and then a donkey, toting the whole package and doing its best to move quickly.

It was a woman. She wore a hat with a string cinched tight to her chin; her bouncing upper body was covered with a dark blouse and brown hair flowed behind her. She would have been a vision to behold if she hadn’t been moving up and down in the animal’s saddle like a woodpecker attacking a virgin tree.

The woman’s head whipped around to look behind her and Ethan followed her line of sight. Three men on horseback materialized.

“Not a fair chase,” Ethan murmured. The men drew their guns and Ethan’s instincts took over—he slid his rifle from its scabbard. With a smooth motion he lined up the sight and shot one of the men’s hats from his head. The man ducked and frantically looked for the shooter.

One of the men, mustached, aimed his gun at the woman so Ethan shot it from his hand. The man immediately cradled his fingers and yelled something at his companions. In a flash the other two began shooting wildly at the woman. Out of the corner of his eye, Ethan saw her fall to the ground with a thud. As the riders continued toward her, Ethan shot one man in the leg and another in the shoulder.

More yelling, and they suddenly changed course, veering away from Ethan’s lookout and disappearing over the hill. The gray-colored donkey had continued to run and was now out of sight. Knowing he might not have much time before they returned, he kicked Whiskey in the side and proceeded to the motionless body of the woman. He hoped they hadn’t gotten her.

Whiskey halted her long stride in a cloud of dust when they were upon the woman’s body. Ethan slid from the saddle, put the rifle back in its holder and pulled his gun instead. The woman groaned as he scanned the surrounding countryside. Ethan kneeled beside her and pushed the hat from her face.

Her hand came to her forehead. “I see stars,” she moaned. She opened her eyes and looked straight at him. Blue eyes. Long lashes. Rosy lips that made him lose his train of thought.

Mentally shaking himself, he glanced down the length of her. The dark blue riding skirt bunched around her knees, revealing ivory pantaloons. Further down her boot-clad feet were laced up to just below her shins. Thankfully, he saw no sign of blood on her person.

“Can you stand?” he asked. “The men chasing you could return any minute.”

“Yes,” she replied. “I’m fine, really.” She pushed herself to a sitting position. Ethan took her elbow and helped her to her feet, holding more tightly when she swayed. She felt petite in his hands but hardly frail.

“Head to the woods,” he said with a nod toward his rest stop for lunch.

As she moved hastily for the cover of the trees, Ethan whistled sharply to his horse. Whiskey turned and followed. Ethan walked backward as he scanned the clearing and the sloping hill beyond, his gun cocked and ready at his side. The air was cooler under the shade of the pine trees; Ethan urged them further back until they came to his second horse, Brandy, loaded with supplies.

“You sure you’re all right?” he asked as he holstered his gun and adjusted his hat. She was looking at him again, and damn if it didn’t make him fidgety.

“Yes. Thank you for your help.” The woman glanced in the direction of the clearing. The tip of her nose was reddened from the sun and her long, loose hair flowed around her in endless waves, making her appear just a bit wild. Why hadn’t she bothered to put it up like most women? Ethan tried to look away but couldn’t.

“Why were those men chasing you?” he asked.

Her gaze swung back to his. She hesitated then planted hands on her hips. “Well, first of all,” she said, clearly about to defend herself, “I did take their donkey, but they’d had the gall to steal my horse first. I don’t think it was entirely wrong of me.”

“You didn’t think they'd come after you?”

She bit her lower lip. “Well, I hadn’t planned on that. Or that donkeys are so slow.”

“Are you traveling with someone?” he asked. “I’d be happy to backtrack your trail and get you to your group.”

“Um, no, that’s all right,” she said and rubbed her forehead again. “Actually I’m heading north.” She sighed. “The donkey has all my gear.”

“Really? I’d greatly appreciate the help. My name is Kate Kinsella.” She extended her hand.

In a rush, Ethan’s cursory fascination with her came crashing down around him. Kate Kinsella. The name of Charley’s fiancée. He'd learned three days prior in Flagstaff that Charley had left town abruptly—heading north—and that his betrothed was hot on his heels. No coincidence here. And if the engagement didn’t put her in off-limits territory then Ethan’s history with Charley did.

He grasped her hand. “Ethan Barstow.”

He released her hand, wondering why she appeared so stunned, her lips parted, eyes wide and her complexion suddenly gone pale.

She stepped back, and Ethan had the distinct impression she was about to run from him.