Innocent to the Last (The Innocents Mystery Series Book 6) 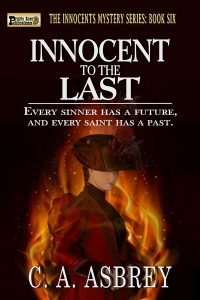 Nat, Abigail, and Jake are hot on the trail of the mysterious man behind the scenes who orchestrated the murder of baby Ava. Determined to bring her killer to justice, they are prepared to do whatever they must, no matter where the clues lead. Rebecca, an attractive newspaper woman investigating the same deadly gang of criminals brings complications into the mix for their plans—and for Jake’s heart.

With a slew of hired killers on their tails, the stars align when they bump into Nat and Jake’s old gang, The Innocents, in the midst of a train robbery. They strike a reluctant deal with The Innocents to take refuge in their old hideout at Ghost Canyon—at a price. Abi’s ability to break into a new type of armored car, one containing a rumored “golden boy” statue, gains them their refuge and buys them some very limited time.

When the hired killers show up at Ghost Canyon, there’s hell to pay with the surprise attack Nat has devised. If Jake survives, will he be able to find peace—and love—with his heart’s desire, at last? Can Nat and Abi deliver retribution for the death of their young daughter?

In a story filled with surprise villains, unexpected love, and gut-wrenching action, these twists and turns keep Nat, Abi, and Jake INNOCENT TO THE LAST…