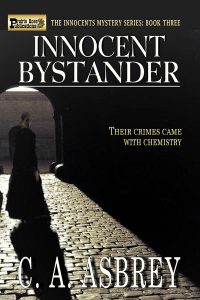 Pinkerton Agent Abigail MacKay’s willful sister, Madeleine, is going to be the death of her yet. That is, if Madeleine doesn’t get herself killed first! After running off to marry a widower whose wives mysteriously die—leaving behind a great deal of money each time—spoiled, beautiful Madeleine is unaware of the danger she’s in. Though no doctor has been able to establish a cause of death for any of the women, Abigail is sure they were murdered—and that her younger sister is going to be next. The only person who can help her save Maddie is the charismatic criminal, Nat Quinn—and Abi left him cooling his heels in jail at their last meeting.

As Fate would have it, Nat and his partner, Jake Conroy, were the last to see Madeleine before she disappeared. She happened to be on a train The Innocents held up—but she was alive and well when they parted ways. And Madeleine is the least of Nat’s worries, now that he’s discovered that Abigail has lied to him about one very important thing—she’s married!

When Abi risks all to ride into the outlaws’ deadly hideout and ask for help, there’s no doubt she’ll get it—but nothing’s free in Ghost Canyon; here, everything has a price. With a new understanding in their relationship, Nat agrees to help her prove David Bartholemew is a cold-blooded killer before he can murder Maddie.

With Jake in charge of Madeleine’s welfare, all hell breaks loose when two competing reporters get involved in the case, along with an old nemesis of Nat’s coming into the mix. One thing is certain: David Bartholemew is a murderer. But how is he doing it? In a race against time, will Nat and Abi be able to figure it out before Jake runs out of ways to protect Maddie from her evil husband? Or will each of them become an INNOCENT BYSTANDER?