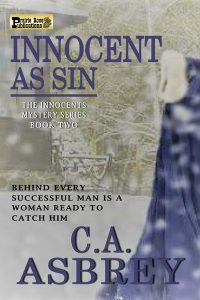 Nat Quinn and Jake Conroy are just doing their job—robbing a bank! But when Nat sees Pinkerton agent Abigail MacKay is already there, he knows something isn’t right. Is she on the trail of The Innocents again, or has she turned up in Everlasting, Wyoming, by coincidence?

Abi can’t believe her bad luck! Nat and Jake are about to make her true identity known, and botch the undercover job she has carefully prepared for—a job she’s been working on for months. When Jake discovers she’s cooperating with a sadistic bounty hunter who never brings in his prisoners alive, he suspects Nat might be the next target. How could Abi would betray them like this?

On top of everything else, someone has dumped a frozen corpse after disguising it as a tramp. The town is snowed in and the killer isn’t going anywhere, but can Abigail’s forensic skills solve the murder before anyone else is killed? Abi and Nat manage to admit their feelings for one another, but will that be enough to overcome the fact that they’re on opposite sides of the law?

The Innocents and Abigail MacKay must work together to solve the murder case, but they’re still best enemies. It’s an emotional standoff, and they’re all INNOCENT AS SIN…