Home for the Heart 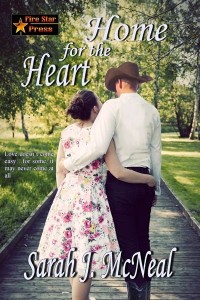 Lucy Thoroughgood has gone and done it now—fallen in love with Hank Wilding, a man she’s known all her life. He’s content with friendship, but Lucy’s heart has flown the coop and she knows she’s in love with the determined bachelor. When she visits him with a proposition—to let the orphans she cares for learn to ride his horses during the summer—he surprises her with one of his own. She must accompany him to the dancing lessons he’s signed up for.

Secretly pleased, she hopes that perhaps this arrangement might lead to more than friendship. But Hank’s loved hard and lost, with his engagement to one of the popular town girls going south two years earlier. He’s sworn to never lose his heart to another—including Miss Lucy Thoroughgood.

A teenage orphan, Chayton, could be the key to thawing Hank’s heart—but danger follows the embittered boy. Will Hank be able to give Chayton the home he yearns for—or will the boy’s past bring only sorrow to those he cares for? When a Lakota premonition becomes reality, Lucy’s life hangs in the balance. Will Hank have the chance to let Lucy know how wrong he was?

In the quiet of the barn filled with the smell of fresh hay, horse manure, and leather tack, Hank sensed rather than heard someone enter the building. Ah, the smell of sunshine and roses. Must be Lucille Thoroughgood. Without turning to look at her, he set the pitchfork against the wall of Lonesome’s stall. “What do you want, Lucy?” he grumbled as a greeting.

“Mr. Wilding, I have something I’d like to propose to you.” Her voice sounded tense. When he turned to face her, he saw those blue eyes dart away from his to peer at the straw on the floor. She promptly straightened her spine and must have forced herself to look him straight in the eye. Her starched manner made him want to mess with her.

“A proposal?” He moved closer to her…maybe too close. He felt something shift in his chest like a warning bell. “Well now, I haven’t ever had a lady propose to me before.” He joked, badly, just to get her goat. Generally, women were not to be trusted. He’d learned that lesson the hard way. But Lucy was his old friend since grade school. Even though she must have been born straight-laced and proper, she spoke her truth, plain and simple. Beneath that barbed wire exterior beat a heart of gold.

Lucy propped her fists on her hips and he thought she looked like a charming sugar bowl all ruffed up in her pink flowered dress and her sweet, straw hat that sat askew on her gleaming brown hair. She knitted those brows together and narrowed her eyes at him. “I’m not proposing marriage to you, Mr. Wilding. I’m proposing a business deal…sort of.”