Home for His Heart 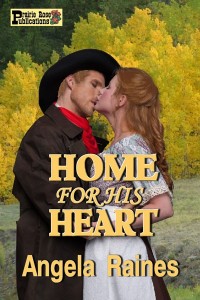 Clara Cross ran away as a young girl after the suspicious deaths of her parents, and has spent the last nine years trying to find safety from a man she had reason to fear. Finally landing in the small town of Agate Gulch in the high Colorado mountains, she believes she may have found a safe home at last, and can send for the brother she had to leave behind. Sam Tower is the man she loves—but would he ever give her a second glance? When Clara’s past catches up with her, her survival depends on her own strength and courage, as well as Sam’s.

Sam Tower runs on a ranch with his friend, Paul Ward, near Agate Gulch. Sam has been running from the past since the loss of his family, and the injury he received as a fife and drum boy in the Civil War. Clara is everything he admires and loves—but she is too good a person for him. When Clara is kidnapped, Sam begins a journey of discovery and finds what he’s always wanted—a Home for His Heart.