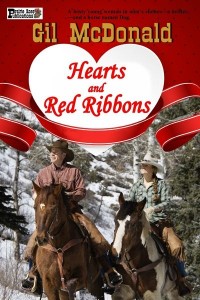 When a beautiful horse charges into their yard one spring evening, Mrs. Jones and her tomboy daughter, Marlee, can’t know how much their lives will change. Marlee goes in search of the owner of the big horse, only to be jumped by an injured man. He’s hurt badly, and Marlee must get him home to safety.

Ben Chambers is searching for something, but until he meets Marlee Jones, he doesn’t know what. Settling down is the last thing Ben wants, but he can’t seem to convince himself of that around Marlee. Valentine’s Day is upon them and there’s only one thing to do—tie Marlee’s heart to his own with a special red ribbon, and let the courtship begin!

It was almost dark when Marlee turned up back at her home, her mother was sitting out on the veranda waiting for her, the shotgun over her knees. Seeing only the man riding the horse, with Cloud in tow, she stood up fast and aimed the gun at him.

"You just stop right there, mister! Who the hell are you, and where's my daughter?"

Marlee risked waving one hand from behind him.

"Momma, it's me, I've had to ride behind him, he's hurt his head, can't sit up straight, so I'm keeping him upright, if we ride up to the porch, can you help me get him down?"

Mrs. Jones placed the shotgun on her seat and rushed to help her daughter as she steered the horse to stand beside the porch. Marlee slid from the buckskin's rump, landing hard on the ground with a thud that jarred her bones.

"Sorry, Momma, but he jumped me, knocked me right to the floor in the damn mud, and then I had to try holding him up for hours. I'm bruised, wet, hungry, and aching, I think I'm allowed to cuss!”

"A lady is never allowed to cuss, especially in the company of a gentleman, Marlee, how often do I have to tell you?"

"He ain't no gentleman! I told you he jumped me! Knocked me clean off my horse and into the mud! He's just a fat old saddle tramp! And anyway he's out cold now."

"I don’t care, he's caused me more than enough trouble and pain, it'd damn well serve him right if he did hear. S'true anyway. Look at him!”

Marlee and her mother pulled the man from the saddle onto the veranda, where he landed with a resounding thud and a low groan. Marlee pushed him with her foot, and he groaned again but didn't stir.

"Well, he sure looks like a big feller, we need to get him to shelter before it gets cold. He can have your bed; you can share with me until he gets on his feet and on his way again."

"Momma! No! I don't want this stinking saddle tramp in my bed. Let him sleep on the floor by the stove, he'll make my bed dirty!”

"Marlee! Damn it girl! Don't you talk back to me! Haven't I told you to be charitable! Bed covers can be changed. A dead man can’t be raised. Now help me drag him inside, then you go sort out the animals.”

Marlee grunted as she bent down to grab the man's jacket front, and helped her mother drag him into the main room of the house. She went to her room and turned down the bedcovers, then took some of her belongings into her mother's small room and threw them onto the dresser, before going back to help her mother drag the man into her bedroom.

Between them, Marlee and her mother managed to heave the man up onto the bed, which creaked beneath his weight. Marlee huffed and stomped out of the room as her mother began unfastening the man’s wet and heavy jacket.