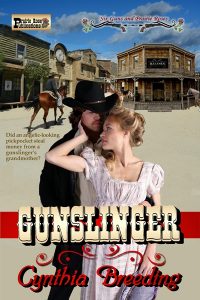 Ex con-artist Abigail Clayton Sayer arrives in San Francisco as a mail-order bride, ready to make a fresh start. Putting her criminal life on the streets of New York behind her is what she intends—and marrying Mr. Travis Sayer was the answer to her prayers—until she learns he has been murdered by a fast gun!

Gunslinger Luke Cameron hadn’t meant to kill Sayer, but he couldn’t let the store owner drag a prostitute down the street by her hair. He’d only meant to wound Sayer, but someone had jostled Luke’s arm as he’d pulled the trigger. Now, here was Mrs. Travis Sayer, the married-by-proxy widow of the man he’d killed, newly arrived in San Francisco and wondering which end was up.

Or was she? Could it be that beautiful Abigail Clayton Sayer is already involved in her dead husband’s illegal activities—his partner in crime? Luke intends to find out—Even if it means exposing Abigail and her brother as the con-artists they were before they came to California—and losing her for good.

Someone else wants Abigail dead, but why? In a race against time, Luke must discover the truth about Travis Sayer’s business dealings and why someone is trying to murder his widow. Her only chance of survival now is to depend on the man who killed her husband…the GUNSLINGER.