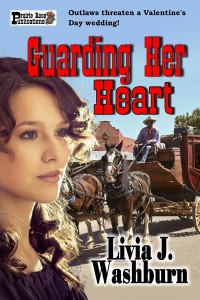 Julia Courtland was on her way west to marry a man she had never met. Henry Everett, the marshal of Flat Rock, Texas, was the grandson of her uncle's best friend. It seemed like a good match for both of them, and the wedding was scheduled to take place on Valentine's Day.

Grant Stafford thought the young woman who got on the stagecoach at Buffalo Springs was the prettiest thing he had seen in a long time. She wasn't too friendly, mind you, but she was sure easy on the eyes. Not that Grant had time to worry much about such things. He was the shotgun guard on this run, but more than that, he was an undercover Texas Ranger on the trail of the vicious outlaw gang responsible for a string of stagecoach robberies.

Fate threw Julia Courtland and Grant Stafford together on a cold February day in West Texas, but it also threw deadly obstacles in their path. A runaway team, a terrible crash, and bullets flying through the air threaten to steal not only their lives but also any chance they have for happiness. If they're going to survive, they will have to learn to trust each other . . . and maybe steal their hearts back from fate.