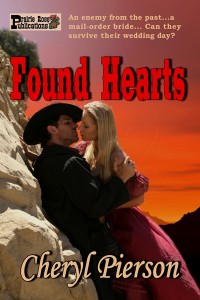 Southern belle Evie Fremont has lost everything—except hope. When she answers an advertisement for marriage to Alex Cameron who lives in the wilds of Indian Territory, she has few illusions that he could be a man she might fall in love with—especially as his secrets begin to unfold.

Ex-Confederate soldier Alex Cameron needs a mother for his two young half-Cherokee sons more than he needs a wife—or so he tells himself. But when his past threatens his future on his wedding day, he and Evie are both forced to acknowledge their new love has come to stay—along with their Found Hearts.