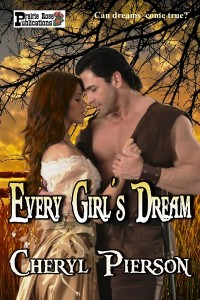 Forced to leave home, after being shamed, Sheena McTavish is surprised by the kindness of a stranger. Callen Chandler, a U.S. Army scout, is unexpectedly stricken with compassion for the lonely, green-eyed young woman he discovers being sick behind the stage office.

After Indians attack the stagecoach carrying Sheena west, an injured Cal and a terrified, but determined, Sheena find themselves thrown together in a struggle for survival.