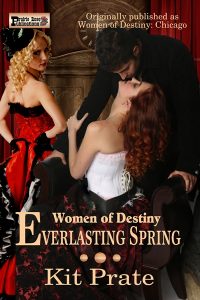 Beautiful Chicago socialite Mary Kathleen McQuade’s life is planned and charted as she has always expected it to be—until two men rip away the façade in a fight for her love—or her wealth.

Devlin Culhane is a rebel who leads the wretched band of McQuade’s Tannery workers in founding a labor union to fight for their most basic rights. The union comes before all else—even his love for Mary Kathleen.

Edward Dennison has devised a Machiavellian scheme to wrest away the McQuade wealth while crushing the striking workers beneath his heel—and stealing everything from Mary Kathleen in his madness.

With two desperate men pitted against one another, there are bound to be casualties—including her own heart. Can Mary Kathleen stop this blood bath before it goes too far? Seizing her destiny with fierce determination, she sets out to restore the financial empire that is hers alone. But can Devlin Culhane give Mary Kathleen her heart’s desire—an EVERLASTING SPRING—before Dennison sees him dead?

Originally published as A Woman of Chicago.