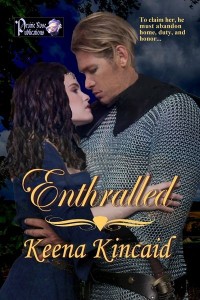 William of Ravenglas wants only one woman—his foster sister, Ami—but she is promised to another, a fate sealed by his father’s recklessness. Resolved to her forfeiture, he forges a dangerous path to bring stability to the house of Ravenglas, balancing the secret demands of the queen against loyalty to the king.

Ami, true sister to Aedan ap Owen the minstrel, refuses her fate. She wants William. But when his kiss awakens her dormant magic, it triggers cascading events that sweep her into the queen’s fiendish web and threaten William's life.

Now Ami must learn to control her fey powers or watch William die. But with a mystery lover in his past, even if she succeeds will he truly be hers?