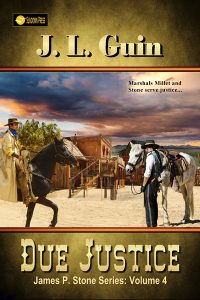 A bank robbery results in a teller’s death in a small town near the Nebraska Territory, and Deputy U.S. Marshals James P. Stone and Jackson Millet are dispatched by Judge Castle to go after the robbers, career criminals Leonard Crepes and T.C. Wilde.

Stone and Millet find themselves in a deadly race against time as Wilde becomes even more daring, killing one man and wounding another a few days later, but the territory they must cover is vast, and Crepes and Wilde could be anywhere.

When Crepes and Wilde split up, Millet and Stone must decide which one of them to follow. But during their search, an unexpected turn of events puts Stone’s old nemesis, Laird, squarely back in their sights once more.

In a desperate, deadly showdown, will Stone be able to finally capture Laird and make him pay for the murder of his old friend and mentor, Eldon Greyson? After five long years, will Stone see that Laird gets DUE JUSTICE?