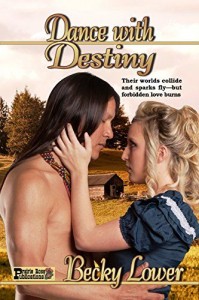 William Myers feels it’s his duty to answer the call to fight for the Union Army—but his wife, Susannah, doesn’t agree. How does he expect her to survive with four small children in the cold Ohio winter during the three-month enlistment period? Angry and abandoned, Susannah learns soon after William leaves that she is also pregnant again.

Raoul Lafontaine is a half-Ojibwa, half-French-Canadian drifter who is more Indian than white. Also known as Lone Wolf, he has recently left the Ojibwa village in search of a fair-haired woman both he and his grandfather have seen in visions. She is important to him—but how? He will never allow himself to care for another—not after losing the wife he loved so much.

But Raoul could not have planned for the sizzling emotions that surface when he comes near Susannah, nor the love he feels for her children. When he realizes that Susannah returns his feelings, he knows he must leave—for how can he stay close by knowing she can never be his? William will return to his homestead, and they’ll once again be a family. One in which Raoul has no place. Or does he?

Will Fate relent and grant the love between Susannah and Raoul in this DANCE WITH DESTINY?