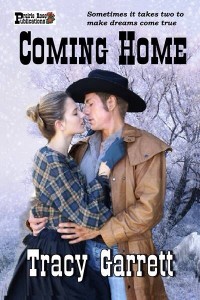 Former U.S. Marshal Jericho Hawken should have been shepherding a wagon train to new territory, but he unwillingly left them vulnerable to a vicious raider. The murder of the settlers he was supposed to be guarding is the hardest thing he’s ever had to face…until he meets the sister of one of the settlers.

…finds a woman who has lost everything…

Instead of a joyous reunion with her brother, Maryland Henry has come to River’s Bend to take responsibility for her three orphaned nieces. Fired from her teaching position and with no other family on whom to rely, Mary believes Jericho Hawken is responsible for all her woes. Or is he what she’s been searching for all along?

It takes a lot of forgiveness and a few fireworks to realize that together their dreams can come true.