Code of the West 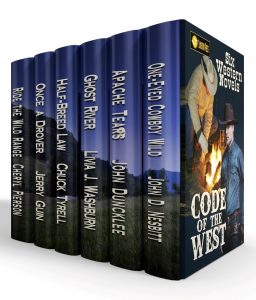 Are you ready to ride into the old west with six fantastic tales of outlaws, lawmen, Apaches and ex-gunmen? There's nothing like outwitting a band of Apache warriors, facing down a man with a hard grudge, or standing with a brother you don't agree with--because he's your blood--and doing it all from your easy chair! Each and every one of these tales of the west are guaranteed to keep you turning pages. You'll share these hard-hitting action adventures as surely as if you were standing in the dusty Texas heat or the wilds of Indian Territory alongside the outlaws, marshals, and bounty hunters captured in the pages of CODE OF THE WEST! So, DRAW...if you dare!

ONE-EYED COWBOY WILD by John D. Nesbitt
Gene Hill welcomes his brother Zeke home, but some of Zeke's new habits have him worried. When Zeke takes up an old feud with the Bickford brothers, Gene has no choice but to stand with his blood--even if it costs him the woman he loves...or his life.

APACHE TEARS by John Duncklee
A young Apache boy, Kaetin, loses everything in one fateful night of death when many of his people are massacred by another Indian tribe. Stolen away and forced into captivity, Kaetin waits for his chance to escape, and when it comes, can he kill the man responsible for the deaths of his mother and sister so many years ago?

GHOST RIVER by Livia J. Washburn
After his entire hometown turns against him for a crime he didn't commit, Jacob Travers runs away and joins a gang of bank robbers. But when a job goes bad and Travers is seriously wounded, he sees the man he considers his only friend turn tail and run--leaving him to die or be caught. Disillusioned but determined to survive, Travers crawls to the site of a deserted trading post in Ghost River--a place he never knew existed--where he recovers, repents, and swears to stay clean. Life has a way of making that difficult, however.

HALF-BREED LAW by Chuck Tyrell
Halfbreed marshal Garet Havelock sets off across the Mojave Desert to retrieve $100,000 in stolen gold bullion. Fate has served up its own brand of justice when he realizes the man he's after is the Yankee raider who shot him years before, Buzz Donovan. But Donovan is pure evil, and Havelock is the only man who can stop his cruel atrocities with a taste of HALFBREED LAW...if he lives through it.

ONCE A DROVER by Jerry Guin
Trouble seems to find Sam Hall, no matter how he tries to avoid it, from St. Louis to Fort Worth and the wide plains in between. But when Sam comes home to Texas to see after his aunt's spread, he's determined to settle down. Fate says differently when a woman in need of his help turns up unexpectedly. No matter what his good intentions were, he must take up his gun once more to save her life.

RIDE THE WILD RANGE by Cheryl Pierson
Young Will Green's entire family is murdered by Red Eagle's Apache renegades. During the long days and nights of captivity, Will plans his vengeance as only a ten-year-old boy can. But those plans are thwarted, along with his own imminent death, by a lone stranger who boldly walks into the Apache camp and forcefully takes Will from the band of warriors. Angry and humiliated, the Indians swear to follow Will and his savior as soon as they can round up their horses--and they won't stop until blood runs red.