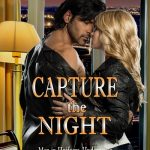 Alexa Bailey intends to celebrate her one-year divorce milestone at the luxurious Riverwind Hotel in Dallas. Instead, she’s plunged into a deadly hostage situation at the hands of a rogue faction of the Irish Republican Army led by madman Kieran McShane. The roof of the hotel is her only escape from the seething danger below.

Johnny Logan is an undercover cop assigned to protect the visiting British Prime Minister. When McShane takes over the Riverwind, all hell breaks loose and Johnny is badly wounded before he manages to escape to the roof.

But the relative safety of the equipment building offers only temporary sanctuary for Johnny and Alexa, and they soon realize even in that remote haven, they’re not alone. With a small hostile army occupying the Riverwind, and the lives of the hostages hanging in the balance, the only thing they can do is try to keep McShane guessing until help comes.

Has love come too late for Alexa and Johnny? The clock is ticking, and time is running out. In a wager that means life or death for them all, Johnny pits himself against McShane in a “winner-take-all” battle high above the city. Will he be able to save the handful of hostages who are depending on him to CAPTURE THE NIGHT?