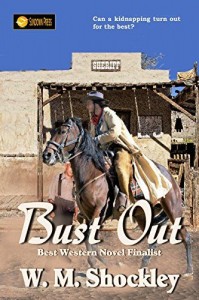 A bank robbery goes awry when Buddy, one of the outlaws, decides to kill the teller and is caught. His accomplice Merle manages to get away, and Buddy sends a prostitute to find Merle and hatch a plan to free him. When Merle shows up, he realizes he’s been framed, and in the chaos of escaping, he snatches twelve-year-old Reuben Solomon as a hostage.

Reuben has finally been allowed the responsibility of making a delivery from his father’s store—then all hell breaks loose. Gunshots ring out, and the next thing he knows he’s being hauled out of town by a stranger. This is the beginning of his big adventure and a new life. As they ride together, Merle teaches Reuben the things the boy’s alcoholic father should have taught him—until Reuben begins to think maybe he might not want to go back to his old life.

When Reuben returns home, it’s just as bad as before—even worse, since he’s learned about the world outside of Shasta. When he receives a gift from Merle, he knows he must head back out to find him. But Buddy has escaped the hangman, and with several murders to his credit, he knows Reuben is his key to finding Merle—and the money Merle took from the bank. Nothing will stop Buddy in his relentless search for the partner he believes double-crossed him. Can Reuben find Merle before Buddy has a chance to murder his old partner?