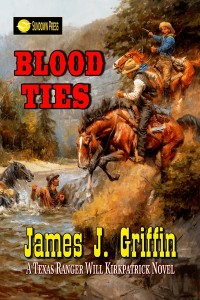 Texas Ranger Will Kirkpatrick brings a young outlaw, Jonas Peterson, in for trial in Pecos, Texas. But Will finds the tables have turned on him when the judge entrusts Peterson to Will’s care for a year rather than sending the youngster to Huntsville State Penitentiary for his crime. It’s up to Will to teach Jonas how to be a Texas Ranger—and how to be a man.

When Will returns to his post with Jonas, Captain Hunter gives him some unwelcome news—Will is going home for his sister’s wedding, whether he likes it or not. Though Will has been estranged from his family since he left to join the Rangers years earlier, Will’s father, Silas, has the governor’s ear. Reluctantly, Will obeys his orders, intending to make the unwanted trip as short as possible.

But when his father’s bank is robbed, and Silas himself is jailed for the robbery, Will and Jonas go after the gang who pulled off the job, determined to see justice done. No matter how bitter the feud between father and son in the past, there’s no way a Texas Ranger can ignore BLOOD TIES…