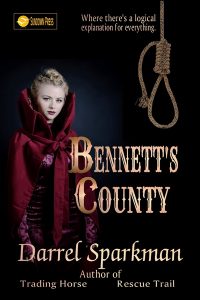 Sheriff Billy Bennett takes his job seriously—and he’s darn good at it. No one breaks the law in his county. So when he gets a complaint of women dancing naked in the nearby forest, of course he has to investigate. Some say they’re witches, but Sheriff Bennett doesn’t hold with that—he doesn’t allow witches in his county.

But when a self-proclaimed warlock comes looking for them with plans to steal them away, Billy Bennett has him ushered out of Bennett’s County for good. There are no warlocks…only bad men. And Sheriff Billy Bennett will see the law is obeyed, no matter what—or who—tries to bend the rules.

Caught in the middle of an odd battle, the sheriff begins to wonder if he’s bitten off more than he can chew in order to keep law and order alive and well in BENNETT’S COUNTY… Is there any way this can end well?