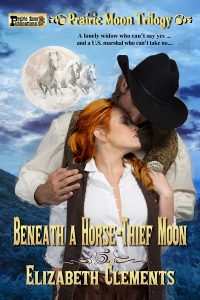 U.S. Marshal Chase Reynolds is on a mission—to track down an escaped train robber, even if it takes him into the wilds of Canada! Hot on the outlaw’s trail, he follows him into the Canadian West—and encounters more than he bargained for when he’s taken prisoner by a beautiful woman.

Sara Cranston is trying to hold on to her ranch that a band of outlaws is determined to steal from her. A woman alone, she’s “easy pickin’s”—and this ruthless crew is after more than the ranch—there’s a legend of buried gold hidden somewhere on her land.

Sara and Chase have a shared past—one that is full of lies and secrets…and love. Seventeen years have gone by, and the passion is still there between them—but will deceit and mistrust keep them from the happiness they both crave?

Chase has a duty to bring in the outlaws, but now he must work fast to do it before they murder the woman he loves. Can he convince her the future is still theirs for the taking if they only survive to enjoy it? Anything can happen BENEATH A HORSE-THIEF MOON…

I loved this heartwarming adventure from talented debut author Elizabeth Clements. —Jacquie Rogers, Author of the Hearts of Owyhee series