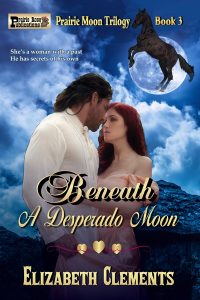 cognize her saucy smile and cinnamon eyes anywhere. Trouble was, so would Buckshot Jones, the outlaw who holds a deadly grudge against her.

Molly has never forgotten that long-ago, bone-melting kiss she shared with Josh—a kiss that chan

ged everything for her. But when she is kidnapped from the stagecoach by Buckshot’s gang of cutthroats, the handsome marshal with the green eyes and killer kisses isn’t around to rescue her.  Josh shows up in the nick of time, claiming that he and Molly are married, but will his claim be enough to hold off the others?

When an old flame from England shows up to lay claim to Josh’s heart, Molly must fight for him. Can she face her tarnished past and keep his love BENEATH A DESPERADO MOON?

Praise for Beneath a Horse Thief Moon

This story delivered on all the emotions - laughter and swooning, sorrow and triumph.

Beneath a Fugitive Moon

Be prepared for twists to flip what you expect around.     —Michelle Reed