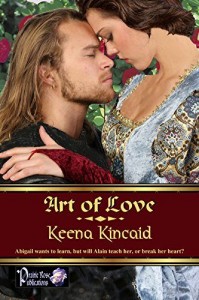 Abigail d'Alene has been sinfully in love with learning all her life, and she now has the means and freedom to indulge in her passion. Disguised as a boy, she heads to the Latin Quarter of Paris and the abbey schools that will one day change the world.

Shocked by the ineptitude of her masquerade, Alain of Huntly Woods takes Abigail under his protection until she recovers her sense and goes home. But her audacity and intelligence spark enough friction between them to burn through his cold logic and carefully laid plans.

In 1159 Paris as a spy for Henry II, Alain has sold his soul to the Angevin devil in exchange for the king's promise of an heiress, land and power. As his good intentions bring him unexpected passion, he struggles to find a way to have it all. Then he discovers Abigail's uncle, confessor to King Louis VII of France, plots against the English king, and Alain must choose between protecting his king or the woman he loves.