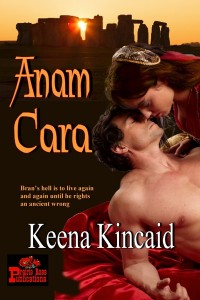 Bran ap Owen knows it’s “once to die, then the judgment,” but his hell is to live again and again until he rights an ancient wrong. Unlike other souls caught up on the karmic wheel, he remembers the past—and he always remembers her—his Anam Cara.

Liza of Carlisle knows nothing of the vow trapping her in Bran’s judgment, yet when he walks into her inn, their instant connection is unnerving. She fights her heart, knowing instinctively this wanderer could destroy the life she loves.

Determined to repair the damage of his first betrayal, Bran uses his visions and the knowledge of a thousand years to court Liza. But Fate conspires against them once more—Liza has secrets of her own. When an evil nobleman, Wakefield, determines to have her young daughter, Tess, Liza is pitted against a danger from which there may be no escape.

Bran regains Liza’s fragile trust, but a fresh betrayal threatens their last hope for love. They both stand to lose everything dear to them in their lives, including one another…again…

Can Bran stop the death of his brother? Can he save Tess from Wakefield’s formidable power? Will he finally be able to make things right with Liza, his Anam Cara…his unforgettable forever love?